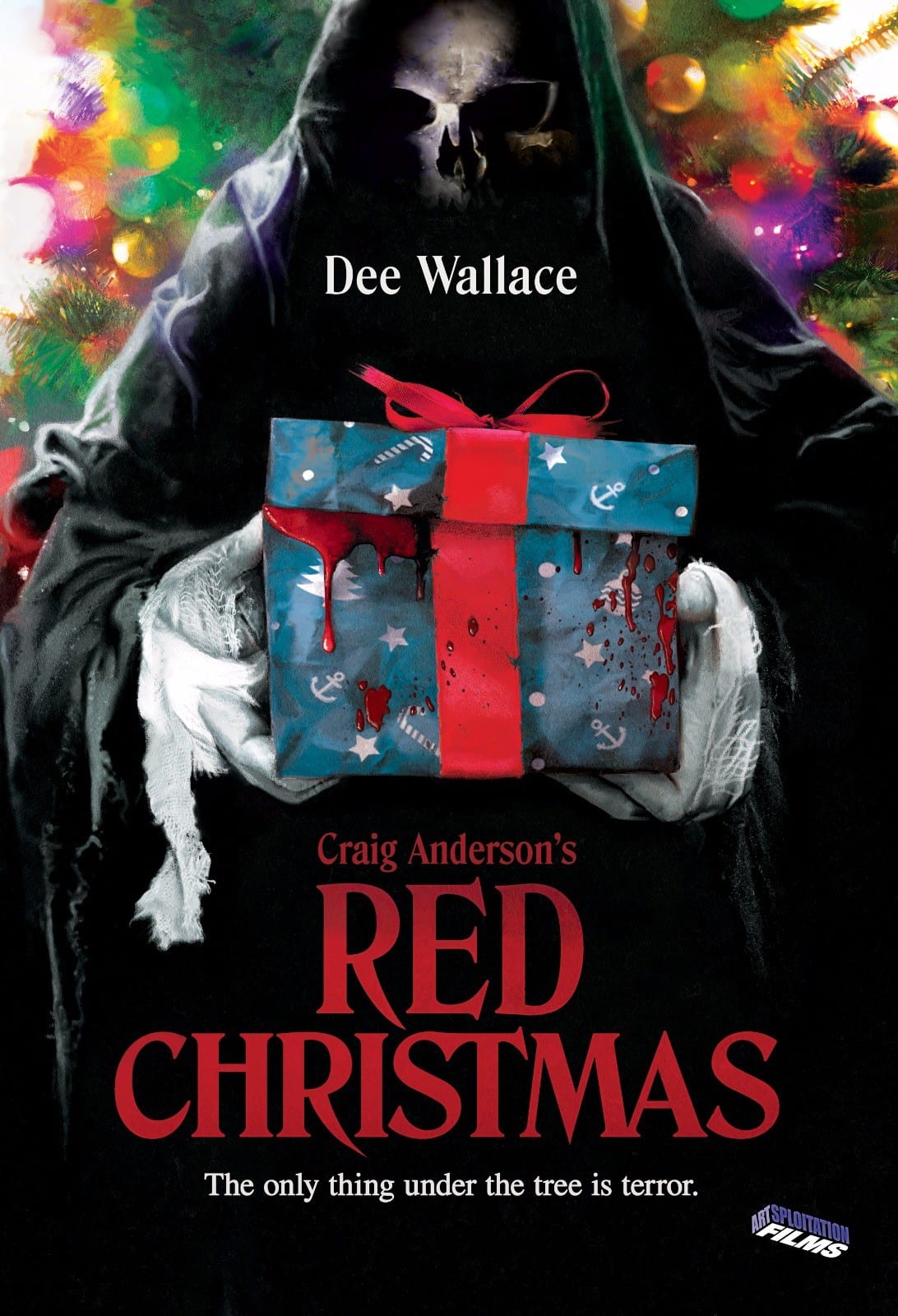 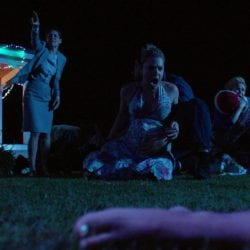 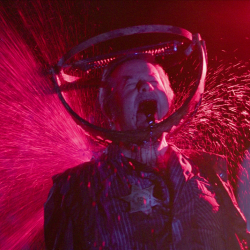 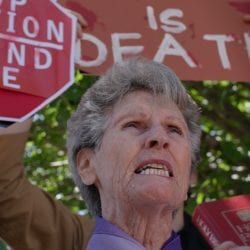 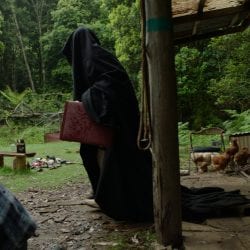 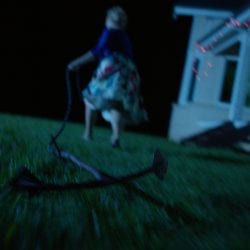 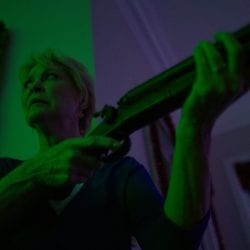 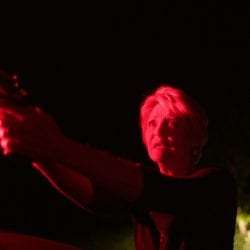 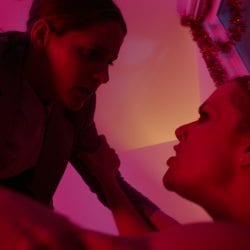 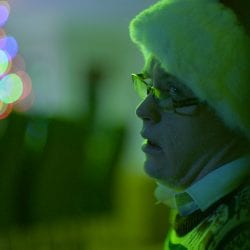 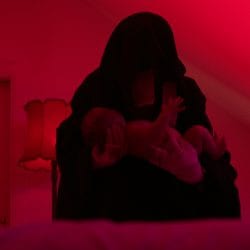 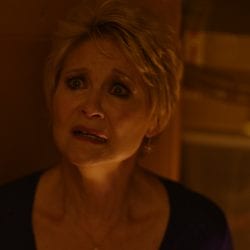 Share on Facebook
Share on Twitter
Horror legend Dee Wallace (The Hills Have Eyes, The Howling, E.T., Cujo, Critters) stars as the stressed-out mother of a squabbling family, gathered together in a remote Outback estate on Christmas Eve. When a mysterious, deformed young man named Cletus appears at their door, things soon change from petty insults to bloody, imaginatively orchestrated violence as Wallace attempts to protect her family from the vengeful intruder. The film deliriously infuses comedy, dark family secrets with outlandish gore and adds the always controversial subject of abortion in its blood-stained mix.
Reviews

“It has earned its place among the best and can sit comfortably on a shelf with Black Christmas, Gremlins, Die Hard – yes it’s a Christmas film! – and Silent Night, Deadly Night as great examples of alternative Christmas cheers. Red Christmas is striking, bold and brilliant; a sure-fire Christmas classic for horror lovers.” – Jessy Williams, Scream Magazine

“An energetic, candy-colored romp through genre tropes that manages to take its subject matter seriously while poking fun at itself at the same time.” – Variety

“Nothing is sacred to Anderson  and setting murderous mayhem on the eponymous holiday is only the beginning of Red Christmas‘ challenge to propriety and good taste.” – Michael Gingold, Rue Morgue

“For horror fans, the practical gore, unapologetic kills and the throwback to the old school and exploitative horror will make viewers cheer even though they know that the family does not deserve to suffer the sins of one person. Impactful, powerful and brutal, even if you are not a horror fan, you will question a lot of the characters and yourself in the nightmare that is RED CHRISTMAS.” – Jay Kay, Icons of Fright

“Quite simply, Wallace can do no wrong, and Red Christmas proves that she still is –  and always will be – a horror force to be reckoned with.” – Horror Film News

“What follows is a calendar slasher, with Anderson playing every beat of the sub-genre to perfection. The kills are pure Eighties, performed with a range of farmhouse tools – and without CGI.” –  Projected Figures

“Wallace is still one of the best genre actresses out there.” – Gruesome Magazine

“Dee Wallace…still has the same magnetic presence she has always had… Her motherly onscreen intuition is sweet, protective and badass. Red Christmas is full of disturbing and bloody holiday cheer and is something that you should add to your Christmas wish list.”  ” – ihorror.com

“Red Christmas has style out the ass.” – Bloody Disgusting

“One of the craziest, most surprising horror films of the year.” – HorrorTalk

“Dee Wallace’s performance throughout is top-notch…It’s satisfying on the surface as a killer-on-the-loose picture, but it’s also a good example of a horror movie with a high body count where you actually care about the bodies.” – DreadCentral

From Haddonfield Horror
What is your story?
I’m an Australian comedy director who has done a bunch of television down under, but always loved horror.

How did Red Christmas come about?
I tried to think of the stupidest film that I could. Because we live in a time where a lot of people can make a film, the battle is now over ideas and the loudest and most ‘outlying’ ideas will get noticed and perhaps resonate. The original impetus for the film, a guy who survived his own abortion meets his family, carried me through the two year writing process.

The film covers a lot of issues abortion, infertility, disability – are these issues personal to you?
As much as they are to anyone. I don’t think that men should have much of an opinion on reproductive rights, as there is way too much of that going on, but I think that horror is an excellent way to process dark ideas, opinions and fears. I met with a lot of women, did research and consulted with a midwife regarding the issues raised in the film and also loved the Tony Kaye movie Lake of Fire, which presented dozens of angles on the topic. The other thing I inherited from Tony Kaye’s documentary was an attempt to remove the ‘binary’ arguments from the topic.
I’ve also worked a lot with people who identify as having an intellectual or physical disability, so I always wanted to be inclusive when making a film, it just turned out that the reproductive rights discussion overlapped.

Every character has a flaw, was this done to create the tension needed, so you can attack the issues in the film from a different perspective?
Every character is meant to represent a different approach to reproductive rights. I don’t know if I meant them all to be flawed, but I did read that good horror writing involved writing characters you like, making decisions you hate. That made sense to me, as I’d experienced that as an audience member and wanted to continue that tradition.

Dee Wallace starred and produced – how did she become involved?
Dee was an absolute blessing. I was fortunate enough to get my script to her through a writer named Lee Gambin who was in contact with her. She read and loved it. Horror does a great job of giving women strong heroic roles and I always wanted to give a scream queen from the 70’s or 80’s a chance to return to the screen in a similar role.
After Dee and I spoke over skype, we were both very excited and Dee’s constant advice and gravitas made her a natural fit for producer.

Was the idea of putting these issues into a slasher film to get a conversation started about them?
Absolutely. Horror can deal with things bluntly and push extreme, horrible thoughts into the public conscience. Nowadays people feel like they can give their opinion on art and that means they are discussing important issues.

What are your favourite horror books or films?
I like non-fiction books about horror “Men, Women and Chainsaws” is a personal favorite, books by RESearch, Creation Cinema and writing by Alexandra Heller-Nicholas. In regards to horror films- I’ll watch anything, I have 10,000 VHS tapes and love discovering random movies amongst them.

There is something about watching a film on VHS but 10,000 VHS tapes!? How was this collection sourced?
I started collecting in the late 90’s, primarily because I wanted to see a whole bunch of Woody Allen films that now cost a dollar. I continued collecting because I realised Video stores were getting rid of them, despite them not being available on DVD, so it freaked me out that these films might not exist anymore if people weren’t keeping collecting the tapes. So it became a Noah’s ark scenario, where I was throwing away tapes as they came out on DVD and kept sourcing ones you couldn’t get. In the last few years, I’ve calmed down and hardly get any new tapes.

What does the future hold?
I’m writing two more horror films right now. One that is about misogyny at college and the other is about online taboos.

Craig Anderson is a comedian who works in the medium of film. As a director, he has twice won the Australian Oscar (AFI – Best Comedy TV Series 2004, ACTA – Best Director – Light Entertainment or Reality 2015) and an International Gold Promax for his network promos for Show time Australia. Red Christmas is Craig’s feature film premiere. ABC Arts Australia has commissioned a ‘making of’ series, which is currently in post-production. As an actor, Craig has appeared in many successful comedy television programs including Black Comedy, Double The Fist, The Moodys, Review With Myles Barlow, Elegant Gentleman’s Guide to KnifeFighting. He starred in Indie comedy feature The Tail Job which premiered at Slamdance 2016. Craig has also starred in the Next Step Hollywood and Miso Hungry. Craig began his career in Theatre and has a First-Class Honors in Performance Studies from the University of Western Sydney, where he also lectured for three years in Performance and Anthropology. He has currently deferred the writing of his PhD – an epistemological analysis of academia on Comedy. 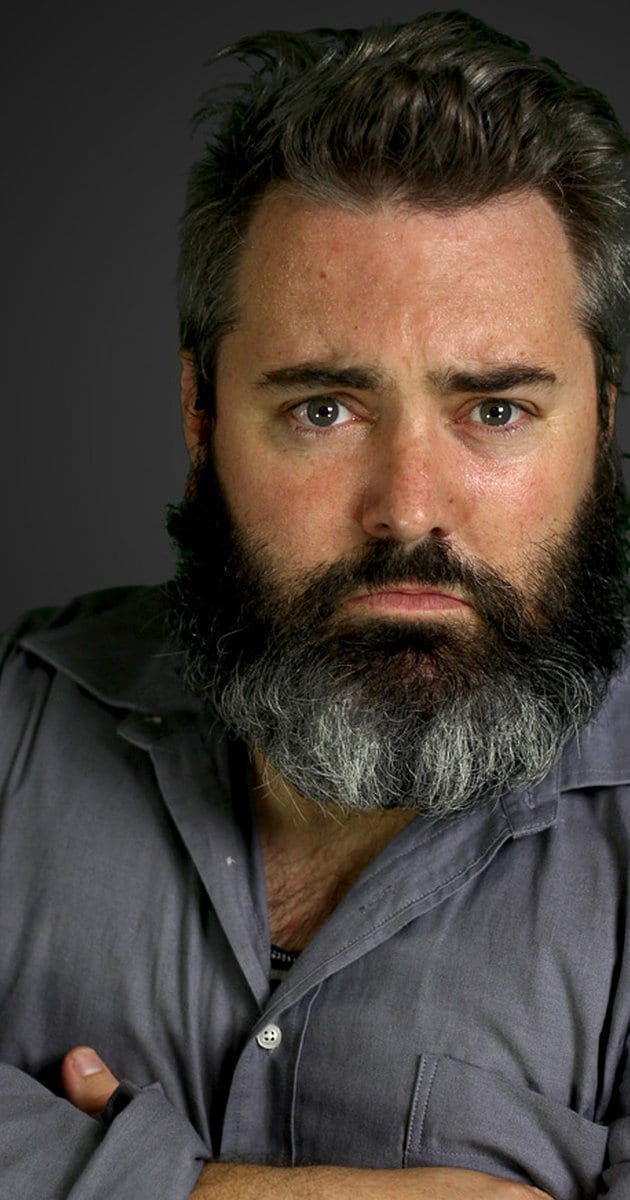