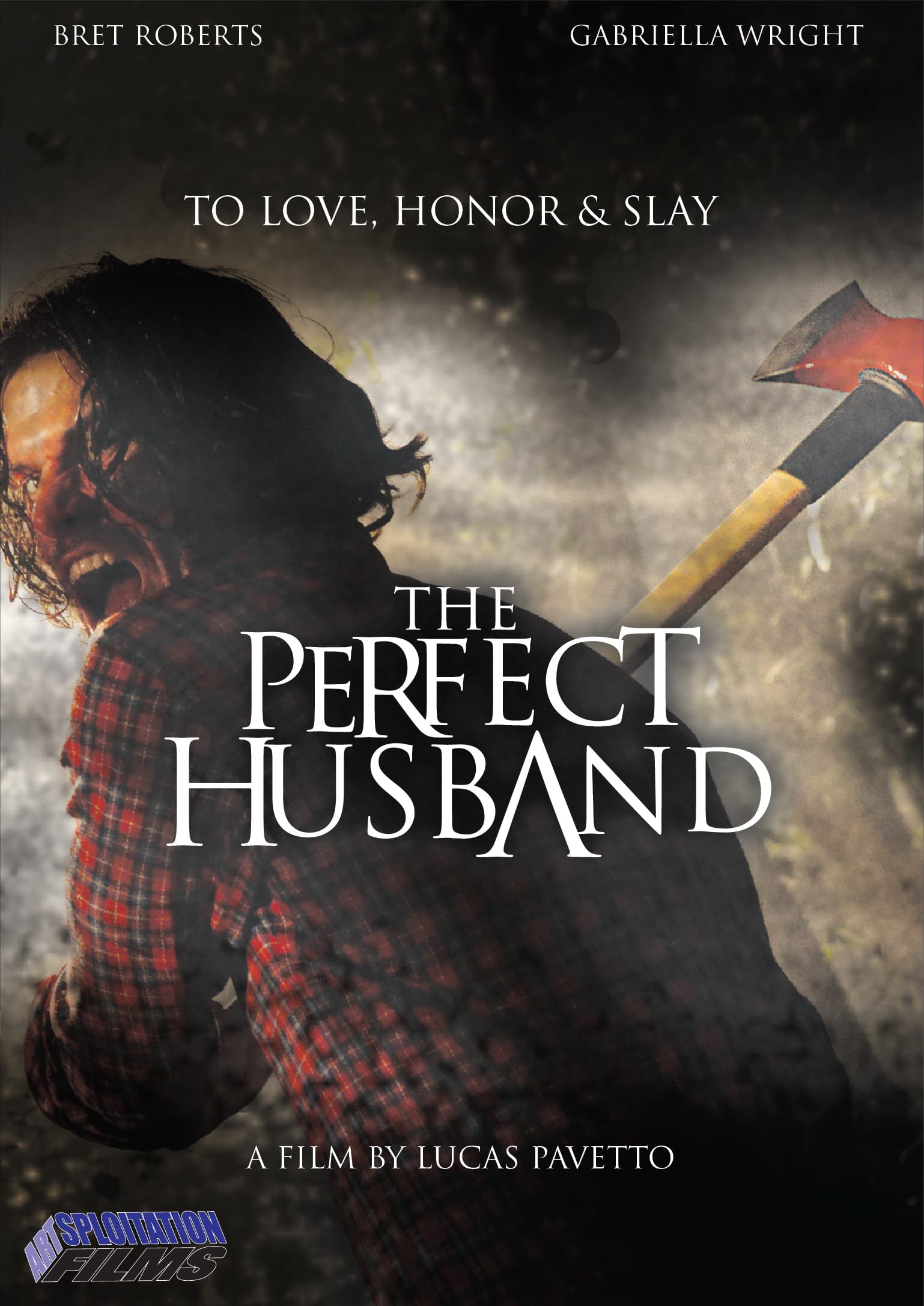 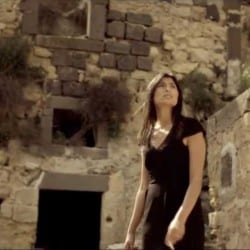 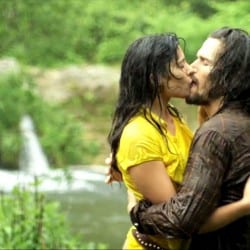 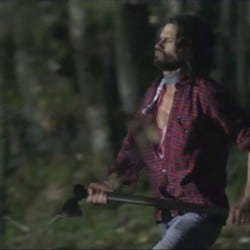 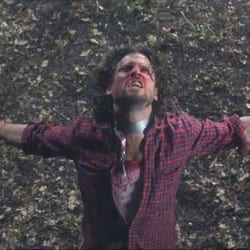 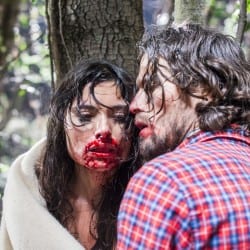 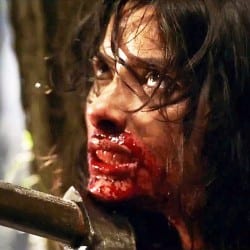 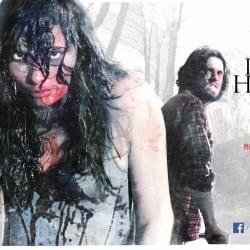 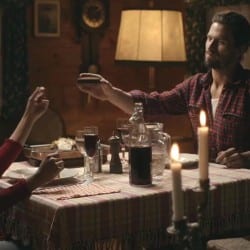 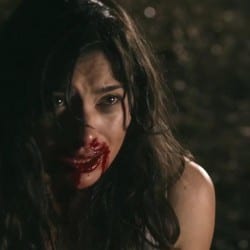 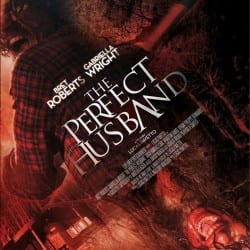 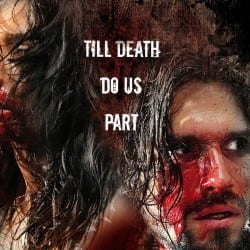 Share on Facebook
Share on Twitter
Viola (Gabriella Wright) and Nicola (Bret Roberts) are going through a difficult period. The couple and their marriage are strained by a termination of pregnancy that has overwhelmed them unexpectedly. To overcome this crisis, they decide to spend a weekend in an old cottage in the woods,. But what was supposed to be a romantic weekend suddenly turns into a deadly nightmare as seething suspicion, maddening paranoia and blind rage explodes around them.
Reviews

“A twist that shocks the senses. – HorrorTalk

“A solid and entertaining horror flick. This is a very niche movie for horror loves, but I’d recommend – it’s worth checking out.”- The MovieBlog.com

“A delirious frenzy of brutal bloodlust and psychological terror with one heck of a big twist…a brutal, gory and nightmarish watch with a stellar performance from Gabriella Wright.” – McBastard’s Mausoleum

“I became giddy when axes started swinging and fingers started getting chopped off. The Perfect Husband may not be the film to start a resurgence in Italian horror, but it is a neat little entry into the genre, nonetheless. If you’re a fan of indie horror and are looking for another Artsploitation film to add to your collection, do not hesitate to pick up The Perfect Husband.” – Repulsive Reviews

“The film takes some interesting turns before reaching its enlightening conclusion…effective…gripping.” – Digital Journal

“The Perfect Husband is a film consciously made for uncomfortable viewing. It is designed to push you into a state of unease until it rips off the niceties and reveals the raw horror. The movie’s terror and violence are fairly realistic, if extreme, when the set-up finally pays off.  [A] disturbing psychological thriller. It’s a finely crafted film with real weight behind it, unusual for giallo films.” DoBlu.com

“Effectively unsettling…Those who really get into the confrontational, nasty side of horror will appreciate this more than your average viewer.” Rock!Shock!Pop!

“[A] fast and furious style, with unforgiving brutality that was surprisingly gory at times. The Perfect Husband wasn’t perfect, but raw, exploitative barbarity is a must see for any violent hound in need of a good scratch. – ItsBlogginEvil
“[Features] strong performances from both Gabriella Wright and Bret Roberts. Roberts giving an especially raw performance that channels his inner Jack Nicholson from The Shining. At times it can be an uneasy viewing experience from several viewpoints. On top of the bloody violence there’s also rape, physical abuse that doesn’t hold back and the broken psyche of a couple on the edge of a total breakdown. THE PERFECT HUSBAND is well made, bloody violent and carried by great performances. Well worth your time.”  Celluloid Terror

“A whirlwind combination of exciting cinematography, ideas, and brutal violence. It’s an extremely hard film to sit through, and not because its in anyway bad or boring. Quite the contrary actually, this is an extremely effective film. It evokes feelings similar to the original I Spit on Your Grave or Last House on the Left. The violence is as exploitative as it gets and will make all but the most jaded and desensitized viewers squirm. The Perfect Husband will be a tough and uncomfortable watch for those who have been affected by an abusive relationship due to the realism in this performance. Gabriella Wright does a wonderful job as well with the role of Viola. The Perfect Husband is a film that works for me not only because it reminds me of so many genre films that I love, but even more so for reasons I can’t really talk about without giving too much of the film away. It’s a narrative that is fairly straightforward but comes with some surprises that ultimately make the depraved journey worth it. While The Perfect Husband features some sheer brutality in it’s violence and portrayal of mental illness, this is complimented with some beautiful cinematography that makes it gorgeous to look at the film as you peak through your fingers. The Perfect Husband feels like a combination of many different films you’ve seen before: the previously mentioned Antichrist in basic premise, the exploitative violence against women in films such as I Spit on Your Grave, the slashers of the 1980’s. Even though the film is Italian in origin it has much in common with the French extremist horror movement films of the mid 2000s, like High Tension or Martyrs….I give this release of The Perfect Husband a recommendation for anyone who is a fan of cinema not afraid to repeatedly punch you in the gut. It is intense, brutally violent & gory, tension filled, well acted, and will make you want a shower afterward. Familiar or not, that’s perfect exploitation film making as far as I’m concerned.” – The Nerd Mentality

“Don’t let the title of this film fool you; this is not a Harlequin romance or Lifetime movie. Oh, no, no, no. This is something much more fun. This is one of those films that starts off all sweet and innocent, but then quickly spirals into a blood-soaked trip of mayhem and madness. And I loved it….this is a heck of a film, and I highly recommend giving it a look….I recommend it. Full of great special effects and some gut-wrenching imagery, this is a film that will haunt your mind long after the credits roll.” – Matthew Scott Baker

“Starts out as a slow-burn psychological (emphasis on psycho) thriller [that] becomes a brutal survival game filled with some real shockers in terms of the ol’ onscreen violence. Honestly, I was in suspense through this whole thing (which clocks in at a brisk 84-minute run time) where as with most thrillers I’m just bored out of my skull. I liked the characters, and actually cared about what happened to them (another rarity), and overall was just impressed. I highly recommend this one. It’s a great take on hoary genre tropes that bring some real squirm-in-your-seat thrills!” Famous Monsters of Filmland

“The Perfect Husband is an excellent example of a ‘mind-fuck-film’ oftentimes in my opinion bringing to mind a brutal European psychological masterpiece by name of Switchblade Romance (aka Haute Tension)….so do yourself a favor and give The Perfect Husband a peek. At the very least it’ll remind you why having an ax close at hand and taking a trip into the woods with your spouse probably isn’t the best of ideas especially if you frequently succumb to grudges leading to uncontrollable urges to fell something other than defenseless saplings.” – Thy Demons Be Scribbin

“In the grand tradition of Italian cinema this film excels when it comes to the more violent moments. And when it comes to the depiction of violence in this film, it is sufficiently bloody and at times borderline sadistic. Anchoring this film are strong performances two leads Gabriella Wright in the role of the wife Viola and Bret Roberts in the role of the husband Nicola. Overall The Perfect Husband is a tension filled thriller that saves its most shocking revelation for its finale.” – 10kbullets.com

“Thrilling and exciting featuring some fantastic camera work by director of photography Davide Manca. In fact, Manca’s work is some of the most polished and finest composition and lighting I have seen in a lower budget film in quite some time. Relying on one location, the film’s visual compositions trap you in the lush forest and cabin in which the film is set, and thus, trapping our protagonists in their seemingly inescapable psychological nightmare.” – WeAreIndieHorror

“This film also has the guts to throw us a twist that we may not see coming. If you are a fan of Ti West and his style of directing, you may be the fan this film is looking for. – Wicked Channel

” you’ll actually get your money’s worth even before the pay-off – the (very) extended finale (plus the rather unexpected resolution) really pack a punch, going beyond what you’d expect of a movie of this irk not so much in explicity but sheer audacity and willingness to push the story further and further still. Quite shocking a finale, actually – and wonderful because of that!” – Searchmytrash.com

“unnerving, brutal..well worth a watch for any fan of the horror genre. – Movie-Blogger.com

“[Director, screenwriter] Pavetto and [screenwriter] Vavassori prove they are geniuses when it comes to suspense…it is an hour and twenty-five minutes worth of drama and speculation. After watching this thriller, many people will probably think twice before choosing their partner for the rest of their lives.” – CrypticRock

“…quite simply been blown away by the shear impact of this stylish, beautiful and brutal piece…unsettling and genuinely eerie. Pavetto then cements his credentials as a screenwriter with a thoughtful and intelligent twist, that leaves the viewer numb after a shocking climax. It’s been a while since a horror movie has displayed style and class in such a creative and mature manner, while also managing to shock the viewer with violence that is not only genuinely unsettling, but also very relevant – certainly a contender for indie horror of the year.
– Firstscreamtothelast

“Terrifying and suspenseful…This is a great movie, no doubt about it!” – The Flick Fanatic’s Companion

Lucas was born in Argentina and moved with his family to Italy at the age of 5. As a youngster, Lucas showed promise in story- telling and the visual arts. After finishing his studies, he decided he would start making his own films and wrote and directed his first of the horror, THE BASTARD CONTADINE, completed in 2005. He kept making films, determined to invigorate the Italian indie scene, and was finally noticed internationally for his short presentation of “Il Marito Perfetto”, which was selected at Roma International Film Fest and won best short at the Buffalo Scream Horror Festival and the Mexico Horror Film Fest. Numerous other awards followed, along with hundreds of thousands of youtube hits. This lead to attention from Italian indie backing to expand the short into Pavetto’s first major feature production, THE PERFECT HUSBAND. Lucas has shot his second feature in New York, a thriller called ALCOHOLIST and it is in post-production. The film stars Bill Moseley and John Robinson. Lucas is currently developing his third feature film, a black comedy called MISERY MARKUS. 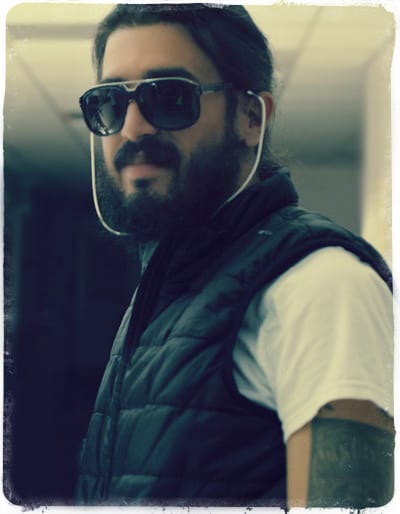